A Brief Look at Different Housing Systems for Commercial Layers

Concerns for laying hens’ welfare began in the 1960’s and led to an aversion to eggs produced by hens housed in conventional battery cages. As a result the European Union (EU) has banned the use of battery cages beginning in January 2012. This move has resulted in the development of alternative housing systems for laying hens. While the EU ban does not currently apply to the commercial egg producers in the United States, some states have made moves towards banning the use of battery cages fo...r laying hens, the most recent being California. With the passing of Proposition 2 in California there has been a renewed effort to develop alternative housing systems to meet all the requirements of good hen welfare. A number of different systems are currently being used to house laying hens, but the majority of laying hens in the US are still housed in conventional cages. Each of the systems used have advantages and disadvantages that vary based on location, management, and genetic strain of the hens. 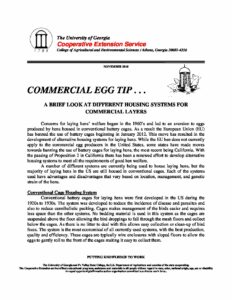