In February of 2011 the farm was visited once again to document any changes that had taken placed since the ceiling was insulated. Though there were no significant changes in the stabilized fiberglass insulation, the depth of the blown cellulose insulation had decreased between one and two inches since installation (There were some isolated areas of the ceiling, near the eaves, where the reduction in depth was closer to three inches - Figure 5). It is important to note that what appeared to be settling near the eaves may be in part due to the movement of insulation caused by increased air velocities that generally occur in this area of the attic on windy days and the fact that the original insulation depth was slightly less due to difficulties involved in blowing insulation near the eaves of a house. In general, what was originally a ceiling with a R-value of 20 ft2*hr/Btu’s (5 ½" blown cellulose) after two and a half years had decreased to one with a R-value of 15 ft2*hr/Btu’s (4" blown cellulose)..... 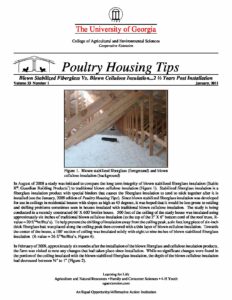