Last winter a study was conducted to determine the possible benefits of installing small mixing fans in houses which used forced air furnaces for brooding. By moving the hot air produced by the furnaces off the ceiling, the 18" circulation fans were found not only to reduce fuel usage on the test farm by approximately 30%, but also raised floor air temperatures by as much as five degrees. Reports from other farms with forced air furnaces which have installed circulation fans this winter have sho...wn similar results, though there have been differences. As a result, some lessons have been learned. 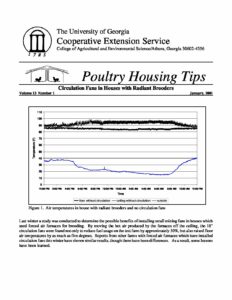