Probably the vast majority of people on the street if you asked them would say that humid air is heavier than dry air. After all, humid air has more moisture in it and therefore should weigh more than air that contains less moisture. But, in actuality dry air weighs more than humid air (Figure 1). This is because moist air contains more water molecules which tend to displace oxygen and nitrogen molecules (actual oxygen levels in air are not significantly affected by humidity). Since a water mole...cule (H20)weighs approximately 36% and 44% less than those of Nitrogen (N2) or Oxygen (O2) respectively, the air becomes lighter as the percentage of water molecules contained in the air increases. Though the density of air does decrease as humidity increases, the effect is actually quite small. For instance, the density of 40oF air decreases less than one percent as the relative humidity increases from 20% to 100% . Though it is true that the density of warmer air changes more with humidity (due to the fact warm air can hold more moisture than drier air), the differences are still very minimal (less than 1%) at temperatures typically seen in poultry houses. 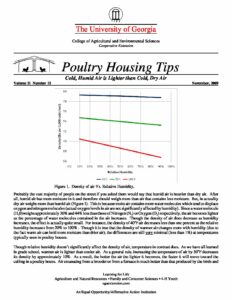