The hottest place in a poultry house on a hot summer day with market-age birds is not next to the ceiling, but rather down between the birds. A house full of market-age broilers can produce a tremendous amount of heat. In fact, 20,000, eight-pound broilers produce approximately the same amount of heat as 20 radiant brooders, which is 16 times the amount of heat that enters through the typical poultry house ceiling. The high level of heat being generated at floor level can easily lead to air temp...eratures at floor level being five or more degrees higher than those near the ceiling. The challenge for poultry growers during hot weather is not only removing this hot air from between the birds thereby keeping air temperatures from becoming excessive, but more importantly removing the heat from the birds keeping their body temperature from becoming excessive.

A producer’s best heat removal tool is air movement. The higher the level of air movement at floor level, the greater the amount of heat removed from the birds, and the cooler they will feel. The amount of cooling a bird can receive through air movement is in part determined by the amount of its surface area that is exposed to air movement. For instance, a bird standing by itself will have air moving over essentially its entire body (back, head, sides, and underside) which will maximize heat removal from the bird and therefore maximize bird cooling (Figure 1). In contrast, a bird that is sitting within in a group of tightly packed birds will only have air movement over its back and head (Figure 2). Since significantly less surface area of a bird is exposed to air movement, heat removal is dramatically lower, and bird body temperature will increase. Though growing birds at commercial densities can make it difficult to get adequate air movement over all the surfaces of a market-age bird, it becomes even more challenging on the evaporative-cooling-pad end of a house when migration occurs. To insure that heat removal is maximized for all the birds in a house it is crucial that the correct number of migration fences are installed in a timely manner and are properly managed so that the birds remain evenly distributed throughout the house.

Even in the best-managed houses the one bird surface which typically receives very little air movement is the breast or underside of the bird. Broilers tend to sit and rest for much of the day, especially when they are older. When a bird is seated not only is there no air moving over its underside, which is a significant portion of its total surface area, but the litter that the bird is sitting on acts as an insulator preventing the bird from losing any heat from its underside. The longer a bird sits, the more the temperature of its breast and the litter underneath the breast will tend to rise. It is only when a bird stands that air can start to move under the bird, helping to remove heat not only from the bird’s breast but the litter as well.

For years it has been debated whether it is beneficial for producers to get their birds to briefly stand up by slowly walking through them during hot weather. Some believe that by slowly walking through a house the heat that builds up under the birds can be released, making the birds cooler. In addition, walking the birds encourages them to get water and feed. Others believe the likelihood of birds piling against migration fences and the increased level of bird activity and therefore heat production does more harm than good. Furthermore, many producers simply do not have the time to walk through all the houses on a farm multiple times each afternoon.

Recently, some producers have installed bird sprinkler systems, in part, as a way to get the birds to stand up without all the negative aspects of walking birds. The thinking is that since birds tend to get up when a sprinkler system is used that this will provide a brief opportunity to cool the litter as well the breast of the bird. Furthermore, a sprinkler system can be used to get the birds to stand up multiple times an hour without the any labor or the concern of birds piling against the migration fences as a house is walked. Though the logic seems sound, the question is whether a sprinkler system will actually significantly reduce breast temperatures during hot weather.

A study was conducted on a commercial broiler farm to explore the relationship between sprinkler usage and subcutaneous breast temperature of market-age birds during hot weather. A commercially available sprinkler system was installed in two adjacent 42' X 500' tunnel-ventilated broiler houses. Bird and sprinkler water usage, outside temperature and relative humidity as well as inside temperature and relative humidity were recorded on a minute-to-minute basis for the last 11 days of a 60-day flock.

Micro-temperature data loggers (Star-oddi nano) were implanted subcutaneously near the keel bone of six broilers, 12 days prior to the catch date. Three birds were placed in each of the two study houses and were allowed to roam freely throughout the house. Prior to catching, the data loggers were removed from the birds and the temperature data was downloaded to a PC. When the data was analyzed it was discovered that one of the loggers failed which resulted in having only two subcutaneous breast temperature measurements in one of the two study houses.

Commonly when conducting a field study there is a test house and a control house. The problem with this method of testing is it assumes that not only are the two houses perfectly identical, but the birds are identical as well. Every farmer knows that though all their houses appear identical and have the “same” birds, rarely is bird activity/performance identical. To account for the “house effect,” the sprinkler system in each of the two houses operated on an alternating three-day basis. Specifically, the sprinkler system was operated in one house for three days and turned off in the second house. At the end of the three-day period, the operation of the sprinkler systems in the two houses would be swapped. Comparisons in bird water usage could then be compared not only between the houses but also within the same house between sprinkler and nonsprinkler days.

Figures 4 and 5 illustrate average subcutaneous breast temperatures along with both bird and sprinkler water usage rates on a minute-to-minute basis for each of the two study houses over the 11-day study. Though it is difficult to discern precise breast temperature patterns from the long-term graph, it is clear to that the highest breast temperatures occur during the dark period (10 pm to 4 am) when the birds stop drinking and sit down.

Figures 10 and 11 provides a view of bird temperatures, along with bird and sprinkler system water usage on the evening of August, 8. In both houses breast temperatures tended to rise when the lights turned off at 10 pm and the birds became less active. There were differences between the level of apparent activity of the birds when the lights went off. The breast temperatures of some birds (ie. Birds d and e) stood up just a couple of times between 10 pm and midnight whereas others (i.e. Birds a and b) stood up a little more often and appeared more restless when they sat down as indicated by small fluctuations in breast temperature. The level of activity of individual birds at night changed from day to day and did not appear to be associated with the use of the sprinkler system during the day. But, what becomes clear when looking at these graphs is that the birds in both houses were similarly active during the daylight hours and similarly inactive during the dark hours. There may have been slightly more variation in subcutaneous breast temperature, possibly indicating more bird movement, when the sprinkler was active but the sprinkler system did not apparently cause a significant decrease in breast temperatures. 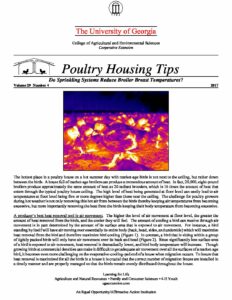