Most poultry are raised in houses that use a negative pressure ventilation systems to aid in maintaining air quality, house temperature, and air movement. When the exhaust fans operate they create a low-pressure zone within the house and outside air rushes in through either side-wall inlets or tunnel inlets to “fill” the low pressure zone. The higher the level of negative pressure, the lower the air pressure is in the house, the faster outside air rushes in to “fill” the house.
...r/>The negative pressure indicated by a poultry house environmental controller is not an absolute measure of pressure, but rather of the pressure difference between inside and outside a house measured in “inches of water column.” If a controller indicates a negative pressure of 0.10" this means that the level of low pressure created by the exhaust fans is the same as that required to draw water up a straw 0.10". The pressure differentials created by the exhaust fans in a poultry house typically run between 0.05" and 0.20", but can be as high as 0.25". Though 0.25" may seem like a lot of pressure, the fact is that we can easily generate enough negative pressure with our mouths to draw water up a straw more than 36".

The negative pressure created by the exhaust fans it is not really something we have to worry about when it comes to directly affecting bird performance. But, it is important to keep in mind that excessive levels of negative pressure can indirectly adversely affect birds when they are result of poor pad maintenance or improper side-wall/tunnel-inlet operation. Excessive pressure due to dirty pads or insufficient side wall/tunnel opening will reduce the air moving capacity of the exhaust fans, which will reduce air exchange rates and wind speeds. This will in turn will lead to increased house temperatures, reduced air quality and a reduction in our ability to keep our birds cool during hot weather. 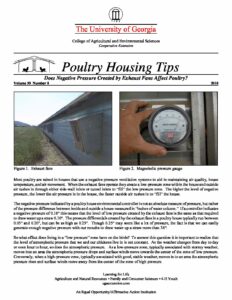