One of the most common complaints about power ventilation is cleaning fan shutters. It is a constant battle. You clean the shutters one day and a few days later they are covered with dust and hanging partly closed again. Studies conducted by The University of Georgia Cooperative Extension Service found that in commercial egg laying houses over a quarter of a pound of dust collect on shutters each day. This means that shutters require practically daily cleaning. In broiler houses shutters don't c...ollect dust quite as quickly. Nevertheless, broiler house fan shutters should be cleaned at least weekly and considering the number of fans on most broiler farms, this can be quite a time consuming chore. 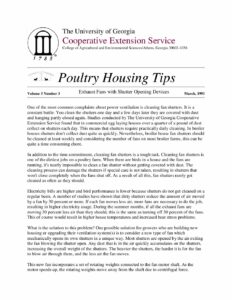