Does high humidity affect the performance of exhaust fans? Yes, but probably not as much as you think and not in the way you may believe. Most people believe that humid air is heavier than dry air. After all, humid air has more moisture in it and therefore should weigh more than air that contains less moisture. But, in actuality, humid air weighs less than dry air. This is because moist air contains more water molecules which tend to displace oxygen and nitrogen molecules. Since a water molecule... (H20) weighs approximately 36% and 44% less than those of Nitrogen (N2) or Oxygen (O2) respectively, the air becomes lighter as the percentage of water molecules contained in the air increases.

Now it is important to note that fewer oxygen molecules in humid air doesn’t necessarily mean the birds are in danger of suffocation when it gets very humid. The fact is, the reduction in oxygen concentration as humidity increases is quite small. As a general rule, for every 10% increase in relative humidity, atmospheric oxygen levels decrease by just 0.05%. So a relatively dramatic increase of humidity of 50% would only decrease house oxygen levels by 0.25%. To put this in perspective, moving a poultry house from sea level to an altitude of just a 1,000 feet would reduce atmospheric oxygen concentration three times as much (0.8%). The simple truth is that there is essentially the same amount of oxygen in the air on a very humid day as there is on very dry day.

Does air temperature affect the air moving capacity of a fan? No. But again, since temperature affects the density of air, it can theoretically affect the power usage of an exhaust fan as well as static pressure. For example, 60oF (50% Rh) air weighs 76.1 lbs. per 1,000 cubic feet while 1,000 cubic feet of 95oF (50% Rh) air weighs 70.1 lbs., an 8% difference. So if a fan were using 1,000 watts of power at a house temperature of 60oF with market age birds, the power usage of the same fan would decrease to 920 watts during brooding if the house temperature is 95oF. If the static pressure were 0.10" at 65oF with four side-wall fans operating and the inlets opened a couple of inches, it would 8% lower (0.092") during brooding with the same number of fans operating and the inlets open the same amount. But, this is a relatively extreme example. During hot weather when house temperatures typically range from 75oF (85% Rh) at night to 85oF (85% Rh) during the day, fan power usage and static pressure would decrease roughly 2%, again essentially unmeasurable. Most importantly, the air moving capacity of the fan would remain unchanged regardless of any change in house temperature.

The fact is that technically it is “easier”, not “harder” for the fans to move humid air than dry air. Does this mean that a high relative humidity is beneficial? No, because the overall effect that humidity has on our exhaust fans is essentially insignificant. What we need to concern ourselves with when it comes to maximizing fan performance is something that will always make the biggest difference, fan maintenance. Simply making sure fan belts are not worn, are tight, and fans and pads are cleaned on a regular basis will help assure that environmental conditions and fan efficiency are optimized 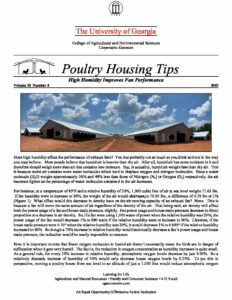