How Many Timer Fans Should I Use?

As a general rule, it is better to run fewer exhaust fans on interval timers for minimum ventilation. This is because using a large number of timer fans leads to wide variations in house temperature and air quality, thus leading to poor bird performance and excessive fuel usage. For instance, let's say you had a choice of running either three 36" fans two minutes out of five or six 36" fans one minute out of five. In both instances you would bring in the same amount of air over the five-minute t...ime period, namely 60,000 cubic feet of air. But, by bringing in such a large amount of cold air over a relatively short period of time, house temperature will decrease much more than if a smaller amount of air were introduced over a longer period of time, causing the furnaces or brooders to come on. Furthermore, since the exhaust fans are off for a longer period of time (four minutes vs. three minutes) air quality will tend to vary more. 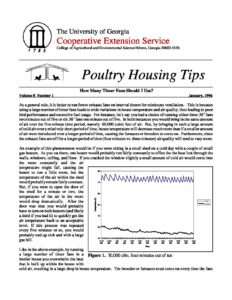