In the late 1950's it took approximately 50 days for a male broiler to reach a weight of 1.7 lbs. By the early 2000's the same weight could be reached at 21 days of age (Havenstein, et. al, 2003). Today it can be reached in as little as 18 days. One of the many challenges of managing today’s fast growing broilers is maintaining proper litter quality. In general, a fast growing bird consumes feed at a higher rate than a slower growing bird. For instance, from 2001 to 2007 feed consumption of a ...male broiler over the first three weeks of its life increased by roughly 7%. The good news is that growth rates over the same period of time increased by roughly 12% resulting in significantly improved feed conversions (1.26 vs. 1.31). The challenge for producers is that water consumption is primarily determined by feed consumption. On average for every pound of feed a bird consumes it will drink approximately 0.2 gallons of water. This relationship is fairly consistent from the beginning to the end of a flock (Figure 1). As a result, as growth rates have increased so has the rate at which we are adding to our houses. In 1985 broilers consumed approximately 30 gallons per 1,000 at 21 days of age. By the year 2000 this increased to 40 gallons. By 2009 broiler water consumption at 21 days of age increased to approximately 50 gallons per 1,000, an increase of nearly 150% (Figure 2). Figure 1. 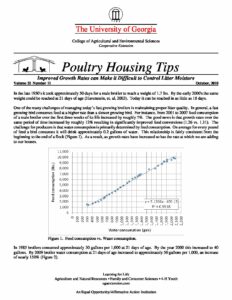