Something to consider. If we preheated and ventilated a house long enough prior to chick arrival, the need for a litter treatment would be drastically reduced, if not possibly eliminated.  Litter treatments are used primarily because the cost of preheating and ventilating a house long enough prior to chick arrival to remove excess moisture and ammonia produced by the previous flock far exceeds that of using a litter treatment.   Litter treatments eliminate the ammonia being generated fro...m nitrogen and moisture left behind by the previous flock; they have little to do with controlling ammonia being generated by the current flock, but rather are intended to buy a grower time.  The goal is to get a litter treatment to last long enough so that generation of ammonia from the previous flock’s litter will die off before the ammonia generation related to current flock’s manure/moisture production begins take off.

A major contributor to the production of ammonia is moisture.  Depending on house management, litter moisture levels are at a peak just prior to preheating and decrease for most of the first week of the chicks’ lives (Figure 1).  Its not until roughly day seven that litter moisture levels typically start to significantly rise.  This means that for most of the first week the ammonia-producing capability of the built-up litter is decreasing.  The better job we do of controlling humidity during the first week, the more moisture we will be removing from the litter, and the more likely we will bring the ammonia production level of the previous flock’s litter down to a manageable level before the litter treatment is used up.

Work conducted at the University of Delaware illustrated the reduction of ammonia production of litter during the beginning of a flock.  Built-up litter samples were put in a chamber and ammonia production rate was measured over a 14-day period.  Air temperature, humidity, and ventilation rates over the two-week study were the same as those typically used by broiler producers.  The researchers found that ammonia generation rates dropped sevenfold over the first seven days then plateaued at a relatively minimal level for the remaining week of the study (Figure 2).  Now had chicks been present, the moisture and manure they add during the first week would have caused the ammonia production rate of the litter to slowly rise over the second week of the study, but with the proper ventilation ammonia generation rates could have been kept to a minimum.  Litter treatments essentially control ammonia from the previous flock, minimum ventilation fans control moisture, and therefore ammonia being produced by the current flock.

Litter moisture is not the only factor that determines the ammonia load a litter treatment has to deal with.  How the litter was worked between the flock is another significant factor.  Windrowing and tilling can decrease the density of the litter, thereby making it easier for the ammonia gas generated deep in the litter to make it to the surface.  Windrowing also tends to mix the wetter litter near the drinkers with the drier litter towards the center of the house, thereby increasing overall ammonia production of the litter.  Last but not least, the more litter is worked, the greater the number smaller pieces of litter are generated over time.   Since smaller pieces of litter have a greater surface area to volume ratio than larger chunks of litter, the amount of ammonia and moisture released by each cubic foot of litter tends to increase.

The more the litter is worked between flocks, the more important it is to ventilate a house to remove the moisture and ammonia being released by the litter.  If  moisture and ammonia are not removed on a continuous basis, litter treatment life will be dramatically reduced.  The fact is increasing a litter treatment’s application rate by 20% or even 30% will not make a dramatic difference in litter treatment life if the ammonia generation rate is 50% or 100% higher than it should be due to improper between-flock litter management.  It is also important to note that purging a house of ammonia by turning on exhaust fans for few minutes prior to the application of a litter treatment, though beneficial from a safety standpoint, will not dramatically increase litter treatment life.  Yes, it will lower the moisture/ammonia in the air but it will do little to nothing to address an excessive litter ammonia generation problem.

Minimizing ammonia concentrations during brooding requires proper litter and environmental management prior to and after the arrival of the chicks. Prior to chick placement, excess moisture and ammonia needs to be removed from the litter which generally takes fresh air, heat, and time.  Once the chicks arrive, a house needs to be ventilated to control humidity, which will not only increase the life of a litter treatment, but also help to keep the generation of ammonia from the previous flock’s and the current flock’s manure to a minimum.  In the end, keeping ammonia concentrations to a minimum during brooding is not about ventilating to remove ammonia, but rather managing the litter and the environment to keep it from being generated in the first place. 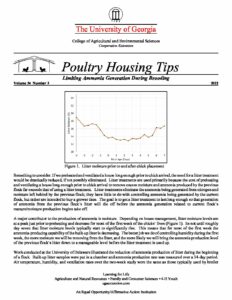 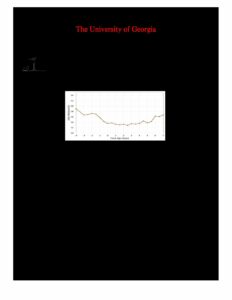