With rising electrical rates, as well as the trend toward increased tunnel fan capacity to keep large broilers cool during hot weather, poultry producers are more concerned than ever about keeping their power bills to a minimum. One of the keys in managing poultry house power usage is knowing precisely how much power a house is using on any given day. The fact is that producers often make incorrect assumptions when it comes power usage because they have no information on how much they are using ...on a daily, weekly or flock basis and as a result miss out on power savings opportunities. For instance, it is often assumed that during brooding power usage is not something to be concerned about because exhaust fan runtime is at a minimum. But in fact, if a house is equipped with 100-watt incandescent light bulbs for brooding they the light bulbs be use the same amount of power as operating three or more 48" fans. So a producer may be using more electricity during the first week than during the third or possibly fourth week of a flock and not even be aware of it. With access to information on daily power usage the effect equipment operation as well as management practices have on daily power usage is easily seen and corrections can be made. 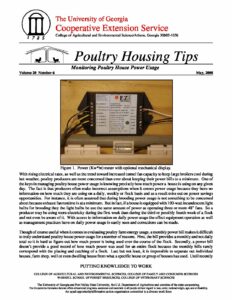