It is generally recommended that evaporative cooling pads should not be operated at night because the relative humidity of the air outside a poultry house tends to run 80% or higher at night. Operating pads when the outside relative humidity is above 80% produces little cooling (less than 3oF) and tends to saturate the income air with moisture making it more difficult for the birds to cool themselves.

Under “normal” summer weather (daily high temperatures in the low to mid nineties) the crossover of temperature and relative humidity typically occurs midmorning (9 - 11 am) and late evening (9 - 11 pm). As a result, the commonly used rule of thumb that evaporative cooling pads should not be used between 10 pm and 10 am is appropriate. But, it is a rule of thumb...not a law. Though the crossover of temperature and relative humidity tends to consistently occur around 80oF and 80 % Rh, the time of day at which the crossover occurs is much more variable. During very hot weather (daily high temperatures in the high nineties) the crossover tends to occur much later at night (12 am - 2 am) and earlier in the morning (7 am - 9 am) and therefore pads can be effectively used earlier in the morning and later at night. Under very extreme circumstances (daily high temperatures above 100oF) the crossover may not occur at all because the outside temperature never falls below 80oF at night therefore it is possible to operate an evaporative cooling system nearly, if not all night long (Figure 2).... 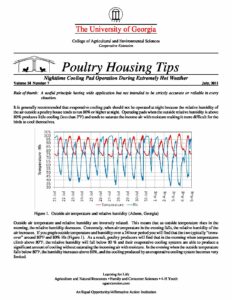