When it comes to controlling both the environment within a poultry house and heating costs during cold weather, house tightness is of utmost importance. This is because only the air that exhaust fans draw in though a house’s air inlet system will be heated and dried by the warm air collecting near the ceiling before moving down to floor level. Cold air that enters through cracks will tend to quickly fall to the floor, resulting in chilled birds, wet litter, ammonia, and in turn, bird health is...sues. Furthermore, under typical wintertime conditions, every square foot of unwanted cracks can potentially increase a house’s propane usage by approximately 1.5 gallons per day.

How can a producer accurately determine house tightness? Traditionally, producers have conducted a simple static pressure test where a house is closed up, a tunnel fan is turned on, and the resulting level of negative pressure created is measured. The higher the pressure created, the lower the number of unwanted cracks. It is generally assumed that a house where a static pressure of at least 0.10" can be obtained is “reasonably tight” and one that can obtain a pressure of 0.20" or higher is “very tight.” Though this method of measuring house tightness does provide a grower with a general idea of house tightness, it is far from precise. Ideally, a tightness test would not quantify a houses’s leakage area, but rather provide some type of objective “tightness rating” and, most importantly, indicate how a house’s leakage area would affect the effectiveness of its inlet system during minimum ventilation.

The Poultry411 - Poultry House Tightness Calculator was developed to provide this very information to poultry house managers. A house’s length and width, as well as the total fan capacity used to conduct the static pressure test (which could be a single tunnel fan or multiple smaller side wall fans) is entered into the calculator. In order to obtain accurate results, it is important that the fan(s) are properly maintained and their air moving capacity at 0.10" static pressure known. The static pressure measured during the tightness test would be entered and the calculator then would quantify the house’s tightness level.

For example, if a static pressure of 0.10" were measured in a 50' X 500' house when a single tunnel fan (rated at 25,000 cfm @ 0.10") was turned on, the calculator would indicate that there is approximately 19.4 square feet of leakage area in the house. The calculator would also show the relative leakage area (square feet of leakage per 1,000 ft2 of floor space), thus standardizing tightness test results. A relative leakage of 0.4 or lower is viewed as excellent (a house capable of providing a high level of environmental control and energy efficiency during cold weather) and anything above 1 is viewed as very poor (a house where it would prove difficult to provide a high level of environmental control and would likely have high heating costs during cold weather). The relative leakage area of 0.78 in this case would be considered a marginal tightness rating.

The next step when using the calculator would be to input the air moving capacity of the fan(s) to be used for minimum ventilation (typically 1 - 2 cfm/ft2 of floor space - on a interval timer) as well as the number and size of inlets (fully opened) to be used. The app would then calculate, based on the calculated house leakage area, approximately how much the side wall inlets will need to open to maintain a static pressure of 0.10" as well as the percentage of the air brought in by the minimum ventilation fans which would enter through the house’s air inlets.

If 50 inlets (10" X 42") and three 36" fans (10,000 cfm @ 0.10" per fan) were to be used for minimum ventilation, the inlets would open approximately an inch and a half and 52% of the incoming air would enter through the inlets and 48% though the cracks, which would typically be considered as marginal. If a producer worked on getting the house tighter and a static pressure of 0.20" could be obtained using the same tunnel fan, the test results would indicate that the leakage area was roughly cut in half (11.3 ft2 vs 19.4 ft2) and as a result the relative tightness rating would be decreased to 0.45 (excellent). Now during minimum ventilation the inlets open two inches and approximately 72% of the air would be entering through the inlets. The producer’s ability to control the environment during cold weather would be significantly improved and excessive propane usage would be minimized.

The Poultry411 - Poultry House Leakage Area calculator is a tool to help producers to not only better understand the results of traditional poultry house tightness tests, but also to see how the results can affect their ability to control their environment and heating costs during cold weather. 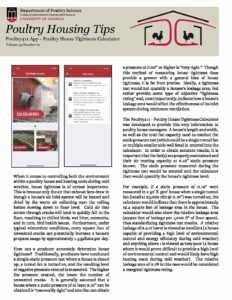