Air movement is very effective at cooling birds during hot weather. As air moves over a bird’s body, heat is removed from the bird’s, making it feel cooler, thereby increasing feed consumption as well as bird weight. The cooling effect produced through air movement is often referred to as the wind chill effect. The challenge for producers is trying to determine how much air movement equals how much cooling so they can determine whether they are keeping the proper house air temperature. For i...nstance, at 80oF is 400 ft/min air speed six degrees cooling or sixteen degrees cooling? If 400 ft/min air speed produces only six degrees of cooling, the producer may want to turn on additional fans to get more air speed and therefore more cooling. Conversely, if 400 ft/min produces sixteen degrees cooling, the producer may want to turn off a couple of fans to reduce cooling to prevent birds from being chilled and electricity from being wasted. 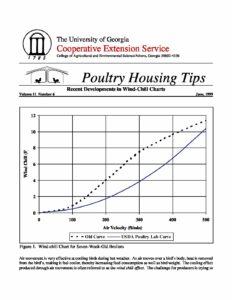