Seven Reason why Chickens are NOT Fed Hormones

It seems to occur with increasing frequency. Sometimes it crops up in a conversation with someone seated next to you on an airplane, or perhaps at a social gathering. If you happen to mention you are involved in poultry nutrition, sooner or later the question is bound to arise: ‘Why do you add hormones to chicken feed?’ The form of the question…asking why? Instead of if?…emphasizes the degree of misinformation prevalent among the general public. As all nutritionists know, it is simply no...t true. Hormones are not added to poultry feeds.
At the recent International Poultry Exposition in Atlanta, over a thousand companies exhibited their products to the poultry industry. As not a single firm that was there markets hormones for poultry, it may be questioned where the general public gets the idea that these substances are an integral part of poultry production. During the past several years, some poultry producers have in their advertising campaigns emphasized that they do not use hormones. Whether this position puts the matter to rest in the mind of the public is not certain. Perhaps, such advertisements might be interpreted to imply that other producers use hormones, or that this was a common practice at some time in the past. It would take a public relations expert to interpret the mental impressions. Another possible reason for suspecting hormone use is that today’s broilers grow so incredibly fast that those not familiar with poultry production might well assume that “magic bullets” are needed. Whatever the case, the misconception that hormones are added to poultry feed is, of course, totally inaccurate and detracts from the image that the poultry industry likes to project to health-conscious consumers. In the interest of refuting this belief, it is the authors’ purpose to not simply deny the use of hormones, but rather to go one step further and provide solid reasons why hormones are not and, in fact, cannot be used in poultry production.

1) Hormone use is illegal. In the United States and many other countries, extremely strict controls are placed on the use of hormones and hormone-like substances in animal feeds. In no case is the supplementation of hormones approved for poultry. While it might be alleged that illegal use of hormones might occasionally be practiced, as will be made clear below there is no logical reason to use these compounds in poultry production.

2) Hormones are not effective. The administration of growth hormone does not lead to increased growth in chickens. In a similar vein, injecting growth hormone into humans will not lead to development of a winning basketball team. Growth is an extremely complex combination of metabolic functions, depending on a wide array of endocrinological signals.

3) Administration is extremely difficult. Like insulin, which is used in the treatment of diabetes, growth hormone is a protein. If either of these hormones were consumed orally, they would be quickly digested in the same way as protein from corn or soy. As is well known, diabetics must receive injections of insulin. Thus even if a positive effect were likely, growth hormone would need to be injected into chickens on a very frequent basis. The logistics of injecting hundreds of thousands of chickens with hormone illustrates the impossibility of this scenario.

Research indicates that the release of natural growth hormone in chickens is pulsatile, peaking every 90 minutes. This could imply that if growth hormone were to be administered effectively, the only feasible way to do this would be through frequent intravenous administration.

4) High cost. As chicken growth hormone is not produced commercially, its cost would be extremely high. If 1 mg were to be administered to a broiler, the cost would be far in excess of the value of the chicken itself. Obviously, this makes no commercial sense.

5) Negative impact of chicken performance. The modern broiler has been genetically selected to grow so rapidly that it occasionally encounters physiological limits. All are familiar with the cases of young men who, as they enter puberty, experience a sharply increased rate of growth. The “growth spurt” is usually accompanied by joint inflammation and other problems. In the same way, the modern broiler lives literally on the edge of its metabolic maximum. In fact, feed restriction is occasionally recommended (either by physical restriction or reduced nutrient density) in order to reduce growth rate and limit the incidence of lameness, heart attack and ascites. In tropical regions, a sharply increased growth rate would almost certainly double, triple or possibly quadruple the rate of mortality from heat stress. Thus, it would be highly counterproductive to suddenly force a higher rate of growth on broiler chickens.

6) What about anabolic steroids? The occasional abuse of anabolic steroids by athletes is periodically documented in the press. There is certainly no question that their use leads to increased muscle mass. However, this effect in athletes is only possible when steroid use is combined with rigorous physical training, such as weightlifting. What makes the steroid question even more unlikely is that the most valuable part of the chicken-the breast-is composed of muscles used to raise and lower the wings. Chickens have not flown for several thousand years. No exercise . . . no benefit from anabolic steroids.

7) Hormones are simply not needed. The extremely rapid growth of broilers is very easy to explain without resorting to hormones. Reviewing the records of genetics firms, it will be noted that for the past several decades birds have reached a specified market weight one day earlier per year. The challenge to poultry producers is to provide high quality feed (proteins, vitamins, minerals, etc.) and a healthy environment in the poultry house, including roof insulation, ventilation and adequate numbers of feeders and waterers to meet the broiler’s prodigious genetic potential. For those familiar with the technical aspects of poultry production, the rapid growth of modern broilers is a logical consequence of slow but consistent improvements in genetics, nutrition, management and disease control. Hormones are simply not needed. 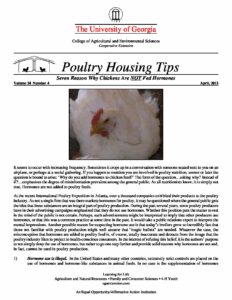