The Importance of Air Speed in Tunnel Houses

It is important to keep in mind that when it comes to keeping birds cool in tunnel-ventilated houses during hot weather air speed is everything. In fact, it is primarily the amount and uniformity of air speed in a tunnel house that sets it apart from other styles of housing, not so much the use evaporative cooling pads. With the right amount of air speed a producer can lower the effective temperature 10 degrees or more no matter how humid it is, remove trapped hot air from between the birds, as ...well as keep temperature difference between the inlet and fan end of a house to a minimum. Because air speed keeps the birds cool in so many ways, a relatively small decrease in air speed can have a have a large effect on a producer’s ability to cool birds during hot weather. 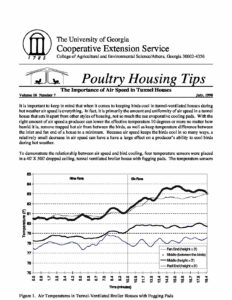