Over the years a variety of migration fences have been used by producers to help minimize bird migration over the course of a flock. For the most part producers have tended to settle on primarily two types of fences: the corrugated black plastic pipe and the epoxy coated wire shelving. Each of these fences has advantages and disadvantages. The corrugated black pipe is easy to install, birds can easily jump over it in case of crowing when the producer is walking through the house, but can def...lect the air movement off the floor when tunneling, and can be difficult to install around feeders and drinkers when the birds are small. The wire shelving material fence allows air to freely flow through it and virtually eliminates the movement of birds towards the tunnel inlet end of a house, but is not free-standing, requiring stakes or stands to be used, and the birds can pile against the fence if a producer is not extremely careful when walking their houses.

Recently, a new migration fence has been developed that has basically combined the advantages of corrugated black pipe and wire shelving material fences while eliminating many of the disadvantages of each. The inverted-V migration fence is constructed by taking traditional wire shelving material and folding it into an approximately eleven inch tall V. The heavy gauge horizontal support wires have been positioned to both strengthen and improve the performance of the fence. The wire running along the top peak of the inverted-V provides strength as well as keeping birds from getting their legs caught in between the vertical wires if they happen to stumble while jumping over the fence. Two other horizontal wires, one on each side of the fence, provide rigidity when the top wire needs to be removed to facilitate the dropping of a water line into the fence. The wires are approximately four inches from base of the inverted-V which allows a water line to be dropped to a level where young chicks would be able to drink if the fences were to be installed prior to chick placement.

The inverted-V fence is self supporting and individual 10' sections (Winter 2012, 12' sections) can be easily overlapped on top of one another a few inches providing a continuous fence from wall to wall. Depending on litter depth and feed pipe height the fence may not need to be cut to facilitate feed lines. Over the course of a flock the fences tend to work themselves into the litter about an inch making them extremely resistant to being knocked down by even the largest of birds. At the end of the flock the fences can be easily stacked and placed on a side wall for storage.

One possible disadvantage of the inverted-V fence is that some producers who are presently using traditional shelving material may find the fence shorter than they would ideally like. Though the fence appears to perform as well as corrugated black plastic pipe in minimizing bird migration, birds can jump over it when crowded, unlike taller shelving material fences. The manufacturer is currently exploring the option of making a taller inverted-V fence, but as you might expect, this would increase the cost of the fence which is currently about the same as traditional shelving with stands or corrugated black plastic pipe.

The inverted-V fence has been under evaluation for approximately a year on a number of test farms. Feedback from the growers on these farms as well as others where the fences have more recently been installed has been very favorable. As with any new device, there could be unforeseen issues with the inverted-V migration fence but hopefully with its relatively simple design they should be minimal if any. 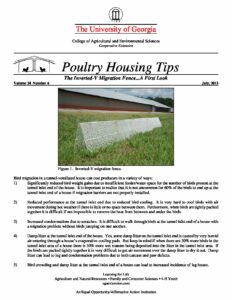