What is the Optimal Static Pressure When Using Air Inlets?

One of the most common questions producers have about ventilating poultry houses during cold weather is “What is the optimal static pressure?” The short answer to this important question is between 0.05" and 0.12". The range of acceptable static pressures is quite wide because of the fact that there is no single correct static pressure that can be used in all houses, under all circumstances that will produce optimal environmental conditions with a minimum of fuel usage. The optimal static... pressure depends on a variety of factors which include, inlet design and placement, inlet opening size, inside/outside temperature difference and house width, to name a few.

The reason we need the air to enter a house with a relatively high velocity during cold weather is so that we can control where it goes once it enters. Cold outside air is significantly heavier than the warmer air inside a house and as a result will have a tendency to quickly fall to the floor upon entering the house. If the air enters with a significant amount of speed, it can be directed away from the floor toward the ceiling where the warmest air in a house tends to collect.

The objective during cold weather is for the air entering through side wall inlets to travel along the ceiling until it just makes it to the center of the house where it then gently moves down toward the floor (Figure 2). We want to maximize the travel distance along the ceiling so the cool incoming air can be heated and “dried” by the warm air collecting at the ceiling that has been put off by the heating system as well as the birds (Figure 3). In addition, air velocity helps to create an air circulation pattern. The cool incoming air emanating from the inlets moves up toward the peak of the ceiling, then down toward the floor and finally back along the floor to the side wall pulling moisture out of the litter as it travels.

It is important to realize that static pressure is not the sole factor determining the creation of a proper air inlet circulation pattern. The direction of the incoming air is equally important. Ideally, during cold weather air should enter through an inlet moving roughly parallel to the ceiling which will maximize the distance the air will travel (Figure 4). The problem with many side wall inlets is that when they are opened a small amount the air enters parallel to the side wall and not the ceiling. As a result the incoming air has to turn 90 degrees before it can move along the ceiling. The 90 degree turn reduces the momentum of the incoming air which in turn substantially reduces how far the air will move along the ceiling (Figure 5).

The performance of many side wall inlets can be improved by increasing the amount they are opened. This is because as the inlet opening increases, the direction of the incoming air tends to change from moving parallel to the side wall to moving parallel to the ceiling (Figure 6). But, herein lies a common challenge. During cold weather inlets do not tend to open much because only a minimal amount of fan capacity is required to control air quality and/or air temperature. Furthermore, higher static pressures are typically required to keep the cold air aloft which also tends to reduce the amount of side wall opening required even more. The combination of just a few exhaust fans operating and desire for fairly high static pressures often results in very small inlet openings which direct the incoming air along the side wall and not along the ceiling. If we increase the amount of inlet opening to obtain an air flow more parallel to the ceiling, the pressure decreases which reduces the throw of the incoming air. As a result, producers are forced to make a compromise. A larger than ideal opening (often 2" to 3") which improves the direction of the incoming air, but at a lower pressure/velocity (i.e., 0.06" to 0.08") which will tend to reduce the throw of the incoming air.

Another factor that affects how far the air will travel along a ceiling is the size of an inlet opening. Smaller openings produce “thinner” jets of air which will not travel across the ceiling as far as “thicker” air jets produced by larger inlet openings. This is because a thin jet tends to have very little mass so it is difficult to get the cold incoming air to travel very far into a house, regardless of the static pressure. To get the incoming air to throw an appreciable amount generally requires an inlet opening of between one and three inches. Very small inlet openings are a common problem in houses with continuous side wall inlets. During minimum ventilation because the inlets run the length of a house they don’t need to open much to fulfill the needs of two or three small minimum ventilation fans. The small air jets produced by a continuous inlet, less than half an inch in height, simply do not have the mass to travel more than a few feet before falling to the floor (Figure 7).

of the factors interact. Raise the pressure, air velocity increases which improves the throw of the air, but the size of the air jet will decrease and the direction of the air may not be optimal which will tend to reduce the throw of the air. Lower the pressure, air velocity decreases but the incoming air jet becomes larger and air direction may improve. At times it is a fine balancing act and can take a fair amount of experimentation to find the optimal combination.

One of the best ways to visualize the air flow pattern from your inlets is to hang small pieces of old VCR or flagging tape from the ceiling, every five feet or so from the side wall to the ceiling peak. What you are looking for is the first few tapes should move fairly violently with the lasts ones near the peak of the ceiling barely moving. Another way to determine if you have your inlets set properly is that the house temperature should not decrease for at least the first 30 seconds or so the minimum ventilation fans operate. In fact, with larger birds it is fairly common to see the house temperature increase a degree or more during the first minute the fans are operating in a tight house with properly set side wall inlets.

Though there are no hard and fast rules when it comes to what level of negative pressure should be maintained when using air inlets during cold weather there are a few general concepts to keep in mind:

1) The objective with any air inlet system during cold weather is to keep the air next to the ceiling until it makes it to the center of the house.

5) Obtaining proper air mixing and conditioning is difficult to obtain with any inlet system when inlets are opened less than an inch. 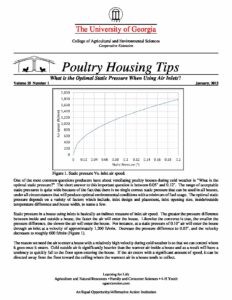