Why Measuring Air Speed at Bird Level May Not Be Advisable

Keeping market-age birds cool during hot weather is all about air speed. It’s quite simple. The greater the air speed in a house, the greater the amount of heat removed from the birds, the lower their body temperature, and the better weight gains and feed conversions will be. Though evaporative cooling pads do aid in bird heat removal during hot weather by keeping house temperatures from becoming excessive, their use results in higher humidity levels which reduces a bird’s ability to cool... itself by evaporating water off its respiratory system. The fact is without sufficient air speed moving over the birds, evaporative cooling pads can often do more harm than good. Because air speed is the primary tool poultry producers have at their disposal to cool their birds, it is important that air speeds are monitored closely during hot weather.

Since it is essentially only the air moving over the birds that produces the cooling effect, there is often a desire to measure air speed at bird level. Though this may seem an ideal place to measure air speed, the problem is that it actually it is one of the most difficult places to accurately measure air speed in a tunnel house. Air speed measurements near the floor tend to vary more than those taken in any other area in a house, often leading to measurement errors of a 100 ft/min or more...... 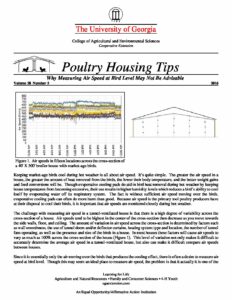