Windrowing has become a very popular method of managing litter between flocks.  In order to get the most benefit out of windrowing, the litter needs to be relatively damp.  How damp?  Ideally the litter moisture content would be between 25 and 35%.  At this level of litter moisture, when you grab a handful of litter and squeeze it, it would form a very tight ball.  Most research has found a litter moisture level of between 25 to 35% is optimal in helping to generate litter pile temperatures... of 130oF or better, which has been shown to be effective in reducing pathogen levels in the litter.   The downside of windrowing is that the same moisture that used to help to reduce pathogen levels in the litter also helps to feed the ammonia generation process.

When the litter is windrowed, there is a relatively limited amount of moisture lost from the piles because the total litter surface area is reduced and ventilation rates tend to be minimal.  The minimal loss of moisture from the litter is often viewed as beneficial because it is thought to prolong elevated temperatures within the piles.  It’s not until the piles are spread out and exhaust fans are used can the litter start to dry.  If it is cold outside and house temperatures are minimal, any significant litter drying will be delayed until preheating is begun.

It is important to note that though it may seem like a good idea to not ventilating a house during windrowing, doing so can prove costly.  Without any air exchange humidity, will rise to near saturation, resulting in condensation formation and ammonia levels will often exceed 200 ppm.  Condensation forming on the ceiling, side walls, fans, etc., and high ammonia concentrations can lead to damaged insulation, corrosion, and possible electrical shorts.  Though ventilating in some limited capacity will tend to reduce house temperatures during cold weather, it will not tend to significantly reduce pile core temperatures due to the insulating properties of litter (Figure 1).

The challenge with windrowing is that by the time the chicks are placed, litter moisture would ideally be cut from around 30% down to around 15%, which would reduce the ammonia generating potential of the litter as well as provide a dry, warm surface for the young chicks to rest upon.   Reducing the top few inches of litter from 30% to 15% in the typical 40' X 250' brooding area requires the removal of approximately 3,400 gallons of water from the litter.   If daytime temps are in the mid sixties, exhaust fans are capable of removing from between 250 and 500 gallons of water from the litter each day.  If it is a week or more after the piles are spread out before chicks are placed, it is very likely that litter moisture levels and therefore ammonia generation rates can be brought down to manageable levels. But, if it is cold outside and little to no ventilation is provided, very little moisture will be removed from the litter each day.  In fact, if the house temperature is in the low fifties and the Rh is around 80%, only approximately100 gallons of moisture will move from the litter into the air each day.  In this case it wouldn’t be until the house is preheated and air temperature increases into the eighties or nineties and the Rh drops below 50%  that litter moisture removal will increases to a significant level (over 1,000 gallons a day), provided minimum ventilation fans are used.  This is why when windrowing during cold weather it may be necessary to preheat houses much longer than normal in order to reduce litter moisture, and therefore ammonia generation rates, down to manageable levels.  Another option is to significantly increase litter treatment application rates over those typically recommended.  It is important to realize that if the litter hasn’t been sufficiently dried, even a higher litter treatment application rate may still not be enough to keep ammonia concentrations to acceptable levels.

Windrowing litter between flocks, if not done properly, can be detrimental to providing optimal brooding conditions.  Yes, windrowing can potentially reduce litter pathogen levels, but it also can lead to damp litter, reduced litter treatment life, and high ammonia concentrations when the birds are most susceptible to its harmful effects.  It is for this reason that windrowing often produces mixed results.  A producer can do a great job of reducing the pathogen load but if litter moisture levels are not sufficiently reduced by the time the chicks arrive, they can potentially end up with excessive ammonia, resulting in reduced bird performance and health issues.  The fact is that windrowing is best suited for use during the late spring, summer, early fall, and when down times are greater than 14 days, which provides the environmental conditions and necessary time making it much easier to remove excess moisture from the litter  prior to chick placement.  During cold weather or when down times are very short, it may be best to consider decaking houses where excess moisture can be removed mechanically from a house in the form of caked litter. 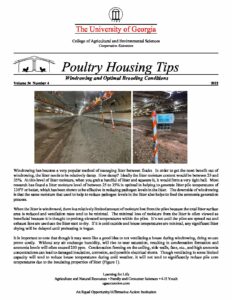 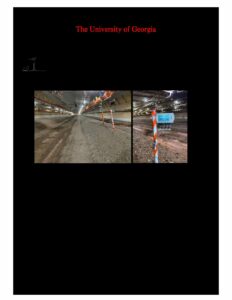