Anyone visiting a poultry farm will quickly become aware of the secondary occupants in and around the houses. The darkling beetle is an insect that is commonly found around poultry, specifically meat production birds and to lesser extent commercial layers. The beetle is also known as “lesser meal worm” and its common habitat is flour, meal, and other grain and cereal products. It originated in the tropics and is well suited for warm humid conditions making the broiler house the perfect habit...at for it. Inside the houses, beetles can be found under feed pans and feed lines where spilled feed is mixed with litter. The life cycle of darkling beetles take 40- 100 days depending on the temperature, as they tend to multiply more quickly as the temperature increases. The adult beetle can live for more than twelve months, with the female beetle laying up to 2000 eggs during its lifetime (Rueda and Axtell 1996). 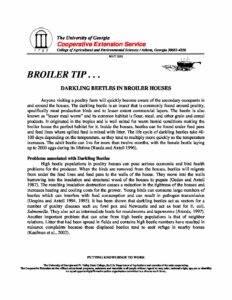