Figure 1 illustrates the incoming air temperature for a properly wetted, six-inch evaporative cooling pad, while Figure 2 illustrates the predicted incoming relative humidity.  The precise amount of cooling, and therefore humidity, produced by any evaporative cooling pad will vary with how throughly a pad is wetted as well as its age.  If significant portions of the pad are dry, the cooling produced will be lower and, in turn, the humidity will be lower.  As pads get older, dirt and minerals ...collecting on pad surfaces tend to increase the surface area of the pad, resulting in slightly increased cooling and humidity. 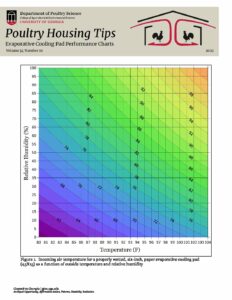 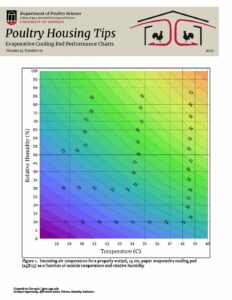