The chart above shows the daily mortality in two 36' X 350' tunnel-ventilated broiler houses on a farm near Athens, Georgia during the first week of July. In House #2, over 500 birds were lost from July 3rd to the 4th. During this same time period only 80 birds were lost in House #1. Both houses had dropped ceilings, six 48" slant wall fans, migration fences, and a fogging system. Birds in both houses were placed at a density of 0.84 square feet per bird and were the same age, approximately seve...n weeks old. The increased heat loss was not a chance occurrence. The two other houses on the same farm also lost an average of over 450 birds during the same two day period. What caused the difference in mortality? 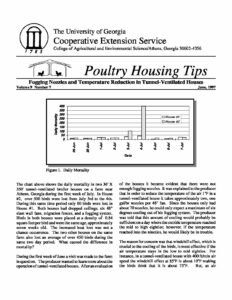