Table 1.  Average air temperature and RH between the hours of 10 AM and 6 PM during the last ten days of the flock

The week after the birds were sold, daytime highs were in the mid-nineties.  On one day all the tunnel fans were turned on in the study houses and the pads were operated between the hours of  12 PM and 5 PM.  As seen when the birds were present, there was minimal difference in the incoming temperature and relative humidity between the five study houses (Figures 2 and 3).  That being said, the incoming air temperature for the house with plastic pads installed in the new distribution system was consistently cooler than the other houses, including the house with same plastic pad installed in the older distribution system.

It is important to keep in mind that since plastic pads do not wick water like paper pads, they are more difficult to throughly wet and as a result are prone to  produce less cooling than paper pads.   The wicking action of paper pads is often underappreciated.  If a distribution pipe hole or two are clogged or a circulation pump is not circulating the proper amount of water, the entire pad area will still tend to be wet due to water moving from the wet areas of pad to the dry areas.  You have probably seen the wicking nature of paper pads in action when the bottom of the pad is sitting on an overfilled reservoir pipe and the bottom six to twelve inches of the pad is wet even though the circulation pump is off.  Since there is essentially no wicking action with plastic evaporative cooling pads, it is crucial that the water distribution system is delivering as much water as possible to all pad surfaces.
Wherein the past the farm manager would partially close the valve above the circulation pump to keep water from spraying out the top of the distribution system to a minimum, the valves above were opened fully.   This was necessary because during preliminary testing it was discovered that when the valves were partially closed, portions of the plastic pads remained dry, which resulted in a reduction in cooling.   Though fully opening the valves did result in significant water wastage in the houses with the older distribution systems, it was deemed necessary in order to determine the maximum cooling ability of the plastic pads.

To date, the field study has demonstrated that plastic pads are capable of producing similar cooling to traditional paper pads.  The lack of wicking action makes plastic pads more difficult to throughly wet compared to paper pads, which may result in reduced cooling in certain situations.  Having a distribution system capable of efficiently circulating a large volume of water over plastic pads will help insure that they produce the necessary level of cooling to keep birds comfortable during hot weather.

*Trade and brand names are used only for information. The Cooperative Extension Service, The University of Georgia College of Agriculture and Environmental Sciences does not guarantee nor warrant the standard of any product mentioned; neither does it imply approval of any products to the exclusion of others that may also be suitable. 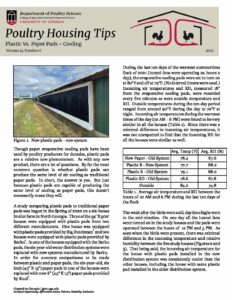