Salmonella Intervention Strategies and Testing Methods Differ Greatly Between the U.S. and Europe what are the Implications?

Countries that produce poultry on a large scale have evolved different methods of production, processing, and testing especially with regard to controlling and testing for Salmonella. The implications of these differences will be discussed.

Production differences: In the U.S., companies are limited as to the types of interventions they may use to control Salmonella in poultry during breeding, hatching, and growout. These limitations are placed on the industry by economic factors, the U....S. Food and Drug Administration, and the shear scale of production. For example in Europe, some countries test all breeder flocks for Salmonella and destroy any breeder flock that is found to be positive. In this way, they have significantly reduced Salmonella to 3-6% on birds coming into the processing facility. This approach is impossible in the U.S., as we produce twice as much poultry in Athens, GA, than is produced in Sweden, where these practices are common. Some countries in Europe use competitive exclusion (CE) to prevent Salmonella colonization of baby chicks. This approach is illegal in the U.S. because the bacterial cultures used to inoculate chicks (which occupy the attachment sites in the intestine and produce by-products that kill Salmonella) are undefined (the particular species used are not specifically identified). Salmonella vaccines are available in the U.S., but are often cost prohibitive. Because of these limitations, the U.S. poultry industry has placed much more emphasis on eliminating Salmonella in the processing plant, whereas in Europe, all of the effort to eliminate Salmonella is concentrated on the breeding and growout operations. 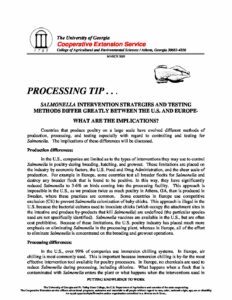