First there was tunnel ventilation with interior fogging nozzles where producers could reduce the air temperature by about ten degrees during hot weather. Fogging nozzles when combined with air speeds of 400 ft/min or more kept the birds fairly comfortable. Then in a quest to minimize house wetting, as well as to increase cooling, producers next turned to fogging pad systems for their tunnel-ventilated houses. Though fogging pad systems virtually eliminated house moisture problems and increased ...cooling by as much as five degrees, producers discovered that if they were not closely managed water runoff from the pads could be excessive and maintaining nearly 300 fogging nozzles was a very time consuming task on farms with poor water quality. Today, many producers are installing what is considered by most experts to be the “ultimate”evaporative cooling system, six inch pad with water recirculation. With six inch pad systems, water wastage/runoff is eliminated while increasing a producer’s ability to cool the air is to 20oF or more. Six inch pad systems may sound problem-free at first, but one thing to keep in mind if you are planning to install one: even though they may produce a substantial amount of cooling and do not “waste” any water, they can “use” a lot of water when it is hot and dry outside. 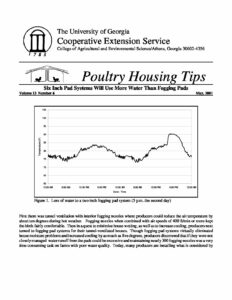