What does it take to control litter moisture during cold weather? Quite simply it requires three things: fresh air, heat, and air movement. Fresh air is required to transport excess moisture from inside the house to outside the house. Heat is needed to increase the temperature as well as the moisture holding capacity of the cool incoming air, and air movement helps to extract the moisture from the litter so it can be exhausted from the house. Any successful moisture control program must com...prise all three components. For instance, if you bring in cold air, circulate it over the litter but don’t add heat, little if any moisture will be removed from the litter. Likewise, it is difficult to dry litter if you bring in fresh air and heat but don’t move it over the litter. And of course if you heat and circulate air, but do not provide an exchange of air you cannot keep a house dry.

This concept is really no different than drying clothes. You can put wet clothes in a dryer, add heat and tumble them, but without fresh air to remove moisture from the dryer, essentially no moisture would be removed from the clothes. You can add heat as well as fresh air but if you don’t circulate the clothes in the dryer it would be difficult to get the clothes fully dried. Last but not least, wet clothes can be circulated in a drier, fresh air introduced but without heat you will have a very long wait. It all comes down to the simple truth that in order to maximize moisture removal, be it from clothes or litter, you need air exchange, heat, and air movement.

A moisture control system in a poultry house consists of timer fans to exchange the air, brooders/furnaces to supply supplemental heat, and most importantly inlets help to condition, warm and dry, the cool incoming air as well as to promote the movement of air over the litter. But, how effective this system is in removing moisture from the litter depends to a large extent on house tightness. This is because it is only the air that enters through a house’s inlets that will be properly conditioned before moving down to and over the litter. Cold, damp air entering through cracks in the side walls, fan shutters, tunnel doors/curtains, etc. will tend to drop quickly to the floor, chilling the birds and removing little moisture from the litter. As a result, the greater the proportion of air coming in through cracks the more difficult it is to control litter moisture. For instance, when operating three 36" minimum ventilation in a loose house (static pressure test < 0.05") well over 50% of the fresh air brought in entering through cracks and not through side wall inlets (Figure 1). This means less than half the fresh air brought in will really help to control litter moisture. Contrast this to a tight house (static pressure test > 0.20") where better than 80% of the fresh air is being properly conditioned by the house’s inlet system before moving down to floor level.

Once a house is made tight, special attention needs to be paid to the inlet system; is it set to achieve maximum heating of the incoming air before it moves down to floor level? The ideal is for the air entering through side wall inlets to travel along the ceiling until it just makes it to the center of the house at which point it gently moves down toward the floor (Figure 2). Essentially, we want to maximize the travel distance along the ceiling so the cool incoming air will be sufficiently heated by the warm air collecting at the ceiling produced by the house’s heating system as well as that produced by the birds. As the air moves along the ceiling, the temperature of the air increases and the relative humidity of the air decreases, making it easier to dry the litter without chilling the birds. In addition, the inlets create a beneficial air circulation pattern. The air emanating from the inlets moves up toward the peak of the ceiling, then down toward the floor and finally back to the side wall, pulling moisture out of the litter as it goes.

One of the best ways to visualize the air flow pattern from your inlets is to hang small pieces of old VCR or surveyors tape from the ceiling, every five feet or so from the side wall to the ceiling peak. What you are looking for is the first few tapes to be moving fairly violently with the lasts ones near the peak of the ceiling barely moving. Another way to determine if you have your inlets set properly is that house temperature should not decrease during at least the first 30 seconds or so the minimum ventilation fans are operating. In fact, with larger birds it is fairly common to see the house temperature actually increase a degree or more during the first minute the minimum ventilation fans are operating in a tight house with properly set side wall inlets. If the temperature quickly decreases when the timer fans come on you are not fully conditioning the cold incoming air before it moves down to floor level, making it more difficult to remove moisture from the litter.

It is important to note that a sudden drop in house temperature can also be the sign that you are operating too many timer fans. Ideally, with young birds a producer should use no more than one cfm of timer fan capacity per square foot of floor space (i.e., 40' X 500' house = 20,000 cfm - two 36" fans) and no more than two cfm per square foot of floor space for older birds (i.e., 40' X 500' house = 40,000 cfm - four 36" fans). The goal is not to flood the house with a large amount of cold fresh air but rather to bring smaller volume of air in the house over a longer period of time so as not to cause large variations in house temperature and air quality. For example, you will find that it is far more effective to use two 36" fans operating one minute out of five rather than to operate four 36" fans 30 seconds out of five minutes.

How do you know how much you should be operating timer fans? Since we are trying to control moisture, one way is to use a minimum ventilation chart based on bird water consumption (Table 1). The more water the birds drink, the more water we need to remove, the more the timer fans we need to operate. Though Table 1 provides a good starting point, in reality the best method of determining how much timer fans should be operated is to simply monitor the relative humidity of the air in a house. The optimal humidity is between 50 and 60%. If the humidity is too high you should increase fan run time, if too low runtime should be decreased.

It is important to realize that though a properly set inlet system will create some amount of air movement over the litter, it is typically not enough by itself to insure maximum litter moisture removal. The problem in part is that though it is true that the inlets when properly set do produce some level of air movement over the litter, in most situations, especially with younger birds, they only do so when the exhaust fans are operating, which is often less than 50% of the time. When the exhaust fans are not operating, the air tends to become still which is not conducive to removing moisture from the litter. Another challenge is that in an effort to keep fuel usage to a minimum the relative humidity during cold weather often tends to run around 60 to 70% as opposed to the optimal 50% to 60%. The higher humidity makes it more difficult for the air to remove moisture from the litter. The negative impact of higher relative humidities can be somewhat offset by increasing the level of air movement over the litter. It is not that different from using a towel to soak up a spill. If the towel is very dry you can simply set it on a spill and it will soak up all the liquid. But, if the towel is damp you will probably need to move it around a good bit to soak up the spill. The damper the towel the more you will need to move it around.

One of the biggest concerns when it comes to controlling litter moisture is how to do so while keeping heating costs to a minimum. Though it will always take some amount of heat to control litter moisture during cold weather, how much depends to a large extent on the performance of a houses inlet system. If a house is tight, air exchange rates will be more closely controlled and air entering through the inlets will be maximized, which in turn will lead to better conditioning of the incoming air as well as better utilization of both heat added by brooders/furnaces and that produced by the birds.

Though at times controlling litter moisture may seem like an impossible task, with proper management of incoming air and house relative humidity, it can be done. Proper litter management will result in better environment for the birds and ultimately better health and performance. 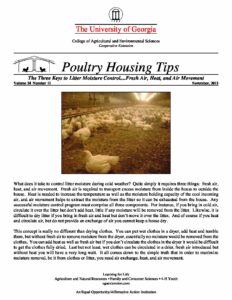